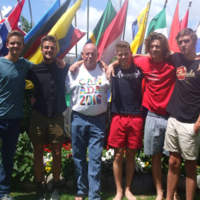 A home for 40 exchange students

There have been 1-week stays, over nights, weekends, Orientations and the dog sledding trip

Well, my story starts many years ago, to be exact around 1993. I had always been interested in finding out more about my German roots on my Mother’s side of the family...

My family was on board with this, and really liked the idea. My son was 12 and my daughter 10 years old, so to have a big brother or sister was going to be really cool. Well it turns out there were no German kids that year, so we decided to choose a girl from Japan (Yuko). She was such a wonderful, shy, quiet, funny person. She always wanted to learn and teach us, so we all fell in love with her. Until it was time for her to go home, and that is when we felt the biggest pain in our heart, and thought this would never leave.

“That first time we said goodbye to our Japanese exchange daughter Yuko had to have been the hardest, oh who am I kidding, all my exchange kids are hard to let go, there are always tears when it is time for them to go home, they just get into your heart, and they become like one of your own kids.”

Well the new year came and I said well shall we try this again, and see if we can get a German student, and we were all in favor, well again no kids from Germany, so we found this most awesome person from the Netherlands, a girl named (Henriette), and again we had such a wonderful year with her, with many fond memories.

Now fast forward ten years, my own kids are out of the house on their own basically, I kept my ear to the movements of the exchange program all the time, always missing hosting, and the young people from around the world. As I am now separated from my wife, I did not expect to ever host again. But who comes along to my work, a gentleman named Mike Hendrycks, who is now in charge of YFU Canada, and he says would you like to host a boy this year? I say to him: “Well I’m a single dad now.” And he said: “So when do you want to look at student profiles?” I said: “Okay well let me ask my children, what they think.” All the way home I’m so excited I can hardly contain myself. I get home and call my son and he says: “Dad it is up to you, you know this is what you love to do!” and my daughter tells me the same thing.

Well I go into work the next day and Mike has some profiles of some boys for me, I look at the first first one, and say I will host Andres from Ecuador. I didn’t even know where this country was, so I wanted to learn about it. His photo was black and white and I was excited and scared all at the same time, thinking: “What am I getting myself into?” I just had a good feeling about him, and it turned out he had red hair, just like my son, and could have passed as his twin brother! The year was fantastic all the way round.

The next year Mike was handing me student profiles and said well how about it? I picked another boy from Ecuador, Christobal, and this year started out really good, as I then started hosting Leon from Germany at the same time. Things were going great until April of that year when tragedy struck, the worst that could ever happen. Christobal died of a Pulmonary Aneurism in my home. I cannot tell you how much pain Leon and I went through that year, in loosing someone so dear to our hearts, and explaining this to his family back home. We all made it through this and I have visited and stayed with his family in Ecuador. The loss was great, but his dad in Ecuador told me: “Chris got live his dream of coming to Canada, and he loved his host dad with all his heart, and could not imagine spending it with anyone else.” This was a tough year to finish, but I still had an awesome German son here, and we had to go on, as we knew Christobal would want it that way. Everyone said I can understand if you do not want to host again, but I said I have too, this is what I love to do.

The next year came, and the next and the next, and my home as been a place for 40 some exchange kids with most being with YFU Canada, 27 to be exact, but there have been one week stays, over nights, weekends, many rides to and from Orientation and the dog sledding trip, and so much more. I have also been back to visit many of my international children and their families in their home countries. There I am always treated like royalty, and the food, well it is out of this world, and the people well I just cannot say enough about them.

The one thing I said when I got married was that I wanted 12 kids, so here we are now, still growing, and now I have hosted exchange students from 13 different countries, and have 5 grandbabies in these countries. I am still in contact with everyone, except with the first girl from Japan, I have lost contact with her. I have said I have seen just about everything, and have learned and cried and laughed, with everyone of them, along with my own two natural grown children, daughter in law and three wonderful grandchildren.

My advice to future host parents would be not to listen to people telling you should not become the exchange student’s friend. You are their friend and they look to you for a hug and a shoulder to cry on. Treat them with respect and guide them. They are a long way from home and in a strange country, with a strange language and customs. Just keep talking with them, and keep them away from sitting alone in their rooms, do things with them, just even going for a ride in the car, or a walk, just little things are what they want most. Be honest with them, they can handle it, they are young adults, and remember this, you were at one time this age, and you were them, only in a different country.

It has become a standing joke among all of my children, and friends, that when I say well that is it, I will not be hosting next year, they just laugh and say: “Oh yes, you will have to be dead before you stop hosting.”

I will be honest there has been a couple of students that just did not fit into my lifestyle or I did not fit into there's so we just ask YFU for a change of family, it is not an easy choice, but it is better for all concerned. So when someone comes to you and says: “Hey what do think about hosting an exchange student?” Just say yes, let’s give it a try!

I would not have wanted to miss this dance of life for anything, with each and everyone of my exchange children and my wonderful family. It is always a challenge for my exchange sons, to see who can make it home and surprise me in a different way, but no matter how they do it, the heart is always open and the tears start to flow. Just this past Sunday one of my boys from Denmark came walking in the door.